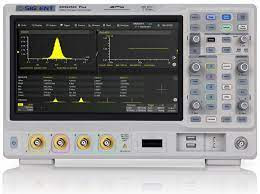 The Siglent SDS2104X Plus Digital Storage Oscilloscopes are available in bandwidths of 100 MHz - 500 MHz, have a maximum sample rate of 2 GSa/s, maximum record length of 200 Mpts, and display up to 4 analog channels + 16 digital channels mixed signal analysis ability.

The Siglent SDS2104X Plus employs Siglent’s SPO technology with a maximum waveform capture rate of up to 120,000 wfm/ s (normal mode, up to 500,000 wfm/s in Sequence mode), 256-level intensity grading display function plus a color temperature display mode. It also employs an innovative digital trigger system with high sensitivity and low jitter.

An impressive array of measurement and math capabilities, options for a 50 MHz arbitrary waveform generator, as well as serial decoding are also features of the Siglent SDS2104X Plus.

The large 10.1’’ display capacitive touch screen supports multi-touch gestures, with the addition of user-friendly one-button design for most commonly used functions, can greatly improve the operation efficiency of the Siglent SDS2104X Plus.

With a waveform update rate of up to 120.000 wfm/s, the Siglent SDS2104X Plus can easily capture low-probability events. In Sequence mode the waveform capture rate can reach 500.000 wfm/s.

Record length of up to 200 Mpts/ch

Utilizing a hardware-based Zoom technique and record length up to 200 Mpts, users can select a slower timebase without compromising the sample rate and then quickly zoom in to focus on the area of interest.

10-bit mode combined with Zoom shows you more details and less noise on the waveform. 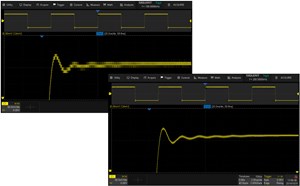 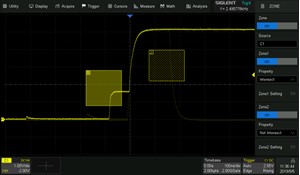 Measurement for all relevant parameters and parameter statistics

Parameter measurements includes 4 categories: vertical, horizontal, miscellaneous and channel delay providing a total of 50+ different types of measurements. Measurements can be performend within a specified gate period. Measurements on math, reference and history frames are supported. 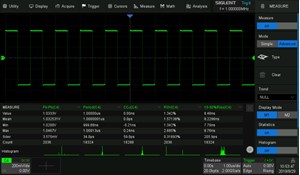 Segmented memory collection will store the waveform into multiple memory segments (up to 90.000) and each segment will store a triggered waveform together with the dead time information. The interval between segments can be as small as 2 µs. All segments can be played back at an arbitrary frame rate using the history function. 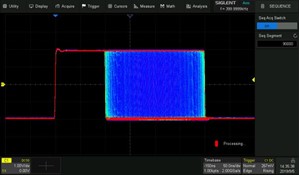 The Siglent SDS2104X Plus can find events within a record and history based on user specified trigger conditions. Navigate browses through events flagged by search, plays back history frames or continuosly moves the delay position on long records (useful in zoom view). 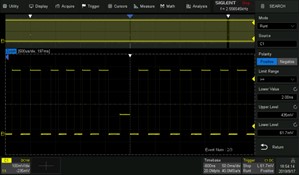 In addition to the decoder lanes correlated to the waveform, bus protocol information can be displayed in tabular form. I2C, SPI, UART, CAN, LIN, CAN FD, FlexRay, I2S and MIL-STD-1553B are supported. 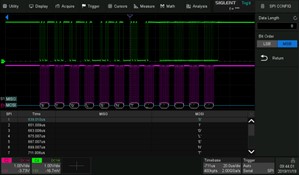 The Siglent SDS2104X Plus utilizes a hardware-based mask test function, performing up to 80.000 Pass / Fail decisions each second. It is easy to generate user defined test templates which the signal trace can be continuously compared to. The failed frames can be automatically stored as history frames or screen shots, making it suitable for long term signal monitoring or automated production line testing. 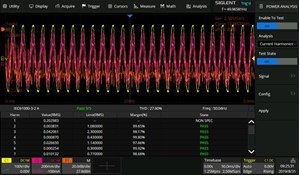 The built-in waveform generator can output waveforms with up to 50 MHz frequency and +-3 V amplitude. Six basic waveforms together with multiple types of predefined waveforms and as user defined arbitrary waveforms are supported.

PEL103 POWER-ENERGY LOGGER Loggers
Product Description The PEL 103 is a low cost, simple to use, one, two (split phase) and three...
Price on request

Siglent SSA3021X Plus (9 kHz to 2.1 GHz) Siglent Spectrum Analyzers
Product Description Spectrum analyzer from 9 kHz to 2.1 GHz and with a 25.7 cm LCD...
Price on request